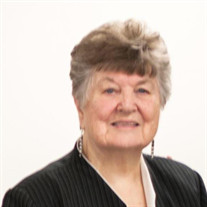 Lois Imogene King Crutchfield was born October 22, 1929 in Hulah, Oklahoma to Bertha Coker and Elwood King. She went to be with our heavenly father on October 5, 2020 at St. John’s Hospital in Tulsa. Her father was a schoolteacher and she attended school where ever he was teaching in Northeastern Oklahoma. She ultimately graduated from Tiawah High School in 1947. She met and married her husband, Alf Crutchfield, a World War II veteran, that same year and they raised three children, David, Janice and Clay in Claremore.
Imogene graduated from Draughon’s Business School in 1955 and began her thirty-six year career in banking at Rogers County Bank in Claremore. She later worked at various banks in Tulsa and retired from Bank of Oklahoma in 1991. Imogene was active in the American Banking Institute both as an officer and as an instructor.
Imogene was proud of her Cherokee heritage, descending from such notables as Dempsey Fields Coker, a Civil War officer and District Solicitor and Chief John Rogers. She was a past president of The Indian Women’s Pocahontas Club in Claremore. Her proudest achievement was Chairing the Committee that in 1999, published a history book, “Pocahontas Spirit—first 100 Years.”
Imogene was a member of the First Christian Church in Claremore, serving as an officer and an Elder. She leaves behind many dear friends in her church family including Pastors Charles and Laurel Ragland.
For much of their lives, Imogene and Alf lived in Rogers County , but following his death, she moved to Grand Lake with her son David and daughter-in-law Adrienne. While living with them, she helped David campaign for Delaware County District Judge and was convinced that her vote ensured his margin of victory.
Imogene is preceded in death by her parents, husband Alf, and son Clay. She is survived by her daughter, Janice and her husband Joe Gilles; her son David Crutchfield and his wife Adrienne; her grandson Matthew Crutchfield and his wife, Lynn and great grandson Colin; her grandson Jeff Gilles and his wife Julie; her granddaughter Codi Ruth and her husband Tony and great-granddaughter Emalee and great-grandson Bobby.
To order memorial trees or send flowers to the family in memory of Lois Imogene Crutchfield, please visit our flower store.