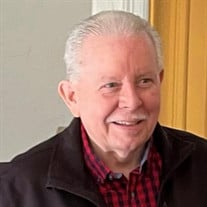 On Friday, July 15, 2022, Oologah resident Lonnie Wayne Lowther was called to his eternal home unexpectedly and suddenly at the age of 72. The world has lost a great son, brother, husband, father, bonus father, grandfather, and great-grandfather.

Lonnie was born in Tulsa, Oklahoma, on February 5, 1950, to Harold and Veronia (Lyman) Lowther and graduated from Inola High School. Immediately following high school, Lonnie enlisted in the United States Marine Corp and fought bravely in the Vietnam War until he was honorably discharged. Due to this occurrence in his life, Lonnie had a strong passion for Disabled American Veterans.

As an avid problem solver, Lonnie pursued a career using this skill as a Licensed Heating & Air Conditioning Technician. He had a passion for working on and restoring older cars or any other mechanical fixture that needed repair. In fact, Lonnie always had multiple projects in the works and could tackle any issue that needed a solution as easy as buttering bread. Owning his business, Lowther Service Company, wasn’t challenging enough for Lonnie, so he took on a second full-time job with American Airlines. He retired from American Airlines after almost 24 years working as a Stationary Operating Engineer.

While servicing a refrigerator at Dailey’s Restaurant in Claremore, OK, Lonnie met the love of his life, Judy. They were married on January 2, 1993, and blended a family of three daughters and a son which he considered all of them his very own. There was no other joy to Lonnie’s life than when the grandchildren came and even more with the arrival of the great-grandchildren. His eyes lit up like the sun and a smile as big as the Texas sky materialized on his face when he spoke of his kids and grands. He passed on his love for projects, fishing, classic cars, collecting a myriad of treasures, music, and a love for airplanes and space. Lonnie and Judy thoroughly enjoyed RV traveling and took their beloved dogs, Missy and Annie, with them on their many adventures across the country.

He is preceded in death by his parents and sister Mary Kathleen Harbour.

Pallbearers are Lonnie’s grandchildren which is one of the highest honors these treasures can bestow upon their grandfather.

Services for Lonnie will be held at 10:00 a.m., Saturday, July 23, 2022, at MMS-Payne Funeral Home Chapel, burial will follow at Woodlawn Cemetery. Friends may visit the funeral home on Friday, July 22, from 2pm - 6pm. Family will be there to greet friends from 4pm - 6pm.

If you prefer, in lieu of flowers, please contribute in Lonnie’s name to Disabled American Veterans ( https://www.dav.org ) or The American Legion a U.S. Veterans Association ( https://www.legion.org/ ).
To order memorial trees or send flowers to the family in memory of Lonnie Wayne Lowther, please visit our flower store.