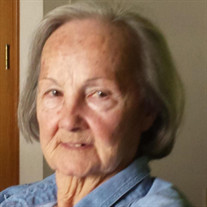 Mary Lauderdale passed away peacefully at her home with her family and loved ones by her side on February 1, 2021 at the age of 86. Mary was born in Brent, Oklahoma on January 27, 1935, to Jess and Okla Williams. Mary grew up on the family farm south of Sallisaw, Oklahoma near the river where her family raised strawberries and cotton. Much later in life, at her home near Chelsea, Oklahoma, she was picking strawberries for dessert that evening in the much smaller home garden, Mary commented, “I said after I left the farm I’d never pick another strawberry”.

Mary attended grades one through nine in Gans, Oklahoma, and then Sallisaw High School, where she graduated on May 22,1953.

After graduating high school, Mary moved to Tulsa, Oklahoma, where she took her first job at a T,G, & Y store. She then worked at Southwestern Bell where she spent nine years as an operator. During that time, Mary met her future husband Rex on a double date. Mary and Rex later married on December 4, 1957.

Mary enjoyed simple things in life. She was for the most part, a home-body. Throughout the years, as a very talented seamstress, Mary made her own clothing, very rarely purchasing store bought items. After retirement as a secretary, for the most part in the oil and gas industry, Mary took up making porcelain dolls. She would spend hours everyday assembling, painting, and making clothes for her dolls. Mary would also spend many Sunday afternoons watching NASCAR with her husband Rex.

Throughout the years Mary overcame several challenges. As a child, she overcame polio, then shortly after retiring in 1998, a severe stroke, in 2010 a hip and shoulder break, and then dementia began to gradually set in. Mary never complained about the difficulties these challenges brought on stating, “I’m just glad it didn’t happen to any of you all”. She always put others needs ahead of her own.

Mary is survived by her son, Michael Lauderdale and fiance Sonja Austin; daughter Lisa Lauderdale; sister Sandra Schmidt; and brothers Paul Williams and Bill Williams; along with many nieces, nephews, extended family members and other loved ones.

Mary will be greatly missed.
To order memorial trees or send flowers to the family in memory of Mary Lauderdale, please visit our flower store.