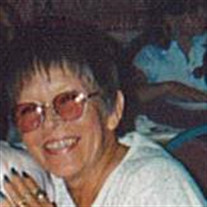 Graveside service for Locust Grove resident, Mary 'Geneva' Smith will be at Highland Cemetery at 2:00 pm on Thursday, October 3, 2019, with Kami Salyers officiating. Visitation will be at Inola Funeral Home on Wednesday, October 2, from 1-8 pm, with family greeting friends from 6-8 pm. Mary passed away in Tulsa on Saturday, September 28th, 2019, at the age of 77.
Mary Geneva Smith was born to Billie Jefferson Perkins and Mary Louise (Curtie) Perkins on Christmas Day, 1941, in Pryor, Oklahoma. It was there that she grew up and attended school, graduating with the class of 1959. On August 2, 1966, Mary and Vernon S. Smith, Jr. were married. They lived for a time in Pryor, then spent time in Texas and Arizona before moving back to Pryor. Eventually they settled in Locust Grove, and it has been her home since, aside from traveling with her son Jim and daughter-in-law Teresa.
She was always a hard worker, beginning her working career at the age of 14. She was very strong and able to do anything that needed done. In the 1970's, she worked as a transportation officer for Whitaker State Children'sHome in Pryor, Oklahoma, leaving there in 1978. She also did factory work for a time, but her favorite occupation was being a part of a husband and wife team, driving a truck. She thoroughly enjoyed her time on the road with her husband.
In her spare time, Mary enjoyed drawing, painting, crocheting, and quilting. She also loved animals, especially dogs, and even had a kennel for a time. But by far, her greatest love was spending time with her family, who meant everything to her. She was a wonderful mother and grandmother, who will be fondly missed.
Mary was preceded in death by her husband Vernon S. Smith, Jr., sons David Scott Smith and Jim Allen Cooper, parents, Billie and Mary Perkins, sisters, Linda Sue Perkins Davis and Sharon Ann Burke, grandmothers Lola Geneva (Parks) Perkins, and Mary Magdalene Downing (Fisher) Curtie, and her twin granddaughters Amanda and Amelia Smith-Plemmons.
Survivors include her children Lisa Partain, Daniel Bruce Cooper, daughters-in-law Hannah Cooper and Teresa Cooper, sixteen grandchildren, 29 great-grandchildren, siblings Donnie Ray Perkins and wife Jennifer, Billie Vernon Perkins and wife Jan, and brothers-in-law Steve Burke and Gary Davis, as well as several nieces and nephews.
View and sign Mary's online memorial at www.mmsfuneralhomes.com .
To order memorial trees or send flowers to the family in memory of Mary Geneva Smith, please visit our flower store.