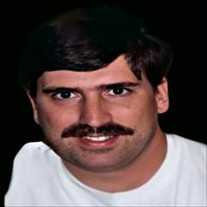 Michael Thomas Martin passed away on April 27, 2020 at the age of 56. Michael was born to Frank and Robertine Martin on January 17, 1964 in Chicago, Illinois. The Martin family moved around from Chicago to Maine, and then to Houston. Michael graduated high school in Madawaska, Maine in 1982. He met his best friend and love of his life, Delinda Berg, in 1992 when he moved to Oklahoma. They married in 1996 and made their home in Inola.
Michael had many joys in his life. He was an avid sportsman and excelled in many different sports such as basketball, soccer, and hockey. Outside of sports, he enjoyed fishing, helping others with projects, and relaxing with family.
Michael was a man who loved his community and bringing people together. He was very involved with the Inola community. Michael helped organize the Inola Fishing Derby and Back to School Block Party. Michael was involved with Leadership Rogers County, the Inola Education Enrichment Foundation, the Rural Economic Development of Inola, and chaired the Rogers County Planning Commission. Volunteering with the Inola Fire Dept, and owning/operating Heartland Floral Supply were also important passions in his life.
Michael is preceded in death by his sister Jody Martin and his father Frank Martin.
He is survived by his wife, Delinda Martin; his mother, Robertine Martin; his sons, Justin Martin, Cody Martin, and step-son, Nicholas Lisnock; daughter, Danielle Martin; brother, Timothy Martin; sister, Marcy Martin; his granddaughters, Taylin and Sawyer Lisnock; and many nieces and nephews.
To order memorial trees or send flowers to the family in memory of Michael Martin, please visit our flower store.