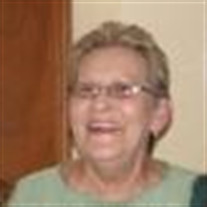 The daughter of Miles "Dink" and Ruth Dennis Bacon was born on September 13th, 1946 in Claremore, Oklahoma. As a young girl she was raised in rural Rogers County. She attend schools in Owalla, and Bushyhead before entering Chelsea schools. She graduated as a member of the Chelsea High School class of 1964. After graduating Milene married her high school sweetheart Ted Hunt. Over the next several years they would live in Tahlequah and Neosho, before returning home to Chelsea. It was during this time that Milene returned to work, beginning with the local sewing factory, then taking a job as a meat cutter at Safeway which later became Homeland. After Homeland closed she began working for Carters Food in Vinita, retiring in 2015.

Milene was known to have a large personality. When you walked into her home it was expected to give her a hug and kiss before anything else. She loved visitors and was the first to always lend a helping hand, give advice, or be a listening ear, she knew no strangers as everyone she met was considered a friend. Her life revolved around her family and friends, therefore she didn't believe in saying good bye but alway said “later".