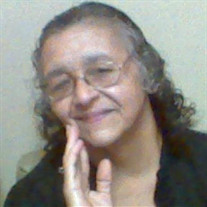 Service for Nancy Lucille Trauernicht will be 10:00 a.m., Friday, September 20, 2019 at New Day Church in Claremore, Oklahoma, burial will follow at Washington Cemetery. Friends may visit at the funeral home on Thursday, September 19 from 1pm-5pm. Nancy passed away on Monday, September 16, 2019. She was 62.

Born July 5, 1957 in Claremore, Oklahoma to Washington Harvey and Flora Kathern (Kelley) Henson, Nancy attended school at both Claremore and Foyil and later began working as a housekeeper for several different nursing homes in the area. She worked at Wood Manor and Rolling Hills to name a few.

In 1972 she married Rex Trauernicht and the couple made their home in Claremore thru the years. Nancy enjoyed crocheting and punch work. Her family was most important to her and she loved spending time with them. Nancy’s fur baby, Haley Bug, was a great companion to her.

Those family members that survive include her children Violet Trauernicht and Rosa Nickerson; her brothers Paul Henson and Walter Henson; and her sister Bonnie Sanders, along with many nieces and nephews. Nancy was preceded in death by her parents, husband Rex Trauernicht; her sister Barbara McCaskey; and her brothers Floyd "Bub" Henson and Oscar Henson.
To order memorial trees or send flowers to the family in memory of Nancy Lucille Trauernicht, please visit our flower store.