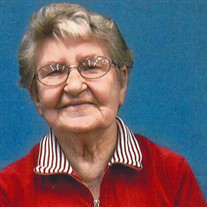 Visitation for Olga Froese will be at Inola Funeral Home and Crematory on Tuesday, April 20, from 1-8 p.m., with family greeting friends from 5-8 p.m., and also on Wednesday, April 21, from 11 a.m. to 1 p.m. Memorial service will be 2 p.m. Wednesday, April 21, at Inola Christian Church.
Olga Lavina Froese was born January 29, 1925, in Avard, OK, to Abraham and Olga (Miller) Wiebe. She was the youngest of 14 children.
She grew up in a two room house in Avard, where she attended Prairie Mound School.
After her father died, she moved to Glazier, Texas along with her mother and a brother. It was there that she met and married Don Farnsworth in 1942, and had three daughters, Sheila, Joyce (Cindy), and Deane.
In 1951, She married Edd Reed in Alva, Oklahoma, and had one daughter, Anne. She married Louis Froese on July 11, 1970, who brought with him one daughter, Judy.
Before retiring, she was the first cook at the Inola Senior Center. She was a longtime member of the Inola Christian Church.
She was preceded in death by her parents, five brothers, and eight sisters, two infant children, three husbands, one grandson, three step-sons, and one step-daughter.
She is survived by daughters Sheila King and husband Steve of Wellington, KS, Joyce Hill and husband Bob of Haysville, KS, Deane Cairns and husband Denny of Hutchinson, KS, Anne Lawson and husband Steve of Branson, MO, and Judy Davis and husband Rick of Strang, OK; special friends and caregivers Matt and Nancy Walls, who took care of her for over twenty years; special nephew Jim Page, who helped take care of her as well, both of Inola, OK; step-daughters Doris Cellan of Alva, OK, and Nola Petty of Jonesboro, AR; 15 grandchildren, 26 great-grandchildren, and 34 great-great-grandchildren, as well as many special friends and family.
To order memorial trees or send flowers to the family in memory of Olga Lavina Froese, please visit our flower store.