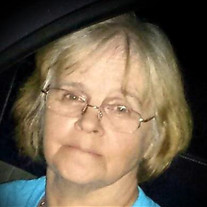 Born June 8, 1952 in Kearney, Nebraska, to Floyd and Iola (McGinnis) Kersting, Opal attended schools in Kearney, Nebraska. She later married Kenneth Wilson and the couple lived in Collinsville for a time, returning to Nebraska before moving back to Oklahoma. Claremore became home for Opal in 1994. She worked as a nurse’s aide and med aid for most of her career.

Opal's most important role was being a mother and later grandmother. She treasured her family and enjoyed time spent with them. She collected Elvis memorabilia and loved watching Gun Smoke.

Opal was preceded in death by her parents Floyd and Iola Kersting; her husband Kenneth Wilson; brothers Bernard and Buddy; sisters Joann, Kathy and LaDonna, stepson Micheal Wilson and her best friend/sister Holly Gustafson.
To order memorial trees or send flowers to the family in memory of Opal L. Wilson, please visit our flower store.