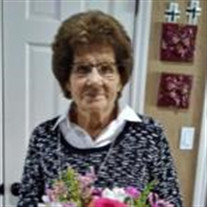 Faye Tolbert left her earthly home to enter into her Heavenly home on Monday, June 22, 2020, with family gathered by her side. She was 87.

Born June 23, 1932 in Holdenville, Oklahoma to Ira Thelmar and Vada Velma Chapman Bratcher. She was born just minutes after her twin sister Ola Mae was born. The family lived in Wetumka, OK until Faye was about 7 years old. The family then moved to Dos Palos, California. There she would spend her childhood and attend Dos Palos schools. Faye grew up with a hardworking father and after the tenth grade, she decided to quit school to help him make enough money to feed their family (she was one of twelve children). Together she and her dad worked in the cotton fields and Faye prided herself with the fact that she could pick cotton faster and harvest more than most men!!! At the end of the week her father would give her a silver dollar for her week's work. Later she worked in a tomato factory where she picked tomatoes and then processed them into ketchup. She would never eat ketchup after that.

She met her soon to be husband at the persuasion of her sister Doris and soon to be sister-in-law Leota at a school dance. After a short period of dating she married the love of her life , Billy Tolbert, at the court house in Merced County, California by the Justice of the Peace on November 18, 1950. The newlyweds made their home in Dos Palos and lived at Hamburg Ranch where Bill was a ranch hand and where he learned the trade of welding. In 1951 their first child Onita was born and 11 months later in 1952 their first son Larry was born. In 1954 they decided to move to Tulsa, Oklahoma where Bill was able to continue his welding trade and Faye would stay home with her two children. In 1956 their third child Gary was born and in 1959 their fourth child Ronnie was born. To help make ends meet Faye would babysit for other families and do what she called "ironings" while the children were young. Later, she and the "boys" would clean office buildings for extra income while Billy was working 3 jobs to provide for their family of six.

In the early 1990's Bill and Faye moved to Claremore and began a new chapter in their lives. Faye learned how to make draperies while living in Tulsa and once in Claremore she and Onita started a drapery business called Draperies Plus. Faye was an excellent seamstress and made clothes for her grandchildren and many others benefited from her talent as well.

Faye and Bill were active members of the Claremore Assembly of God Church and shared many years there and were involved in anything that they were asked to do. They were very devoted to their church family and it was dementia that eventually kept them from going to the house of worship that was such a huge part of their lives.

Faye and Bill were a part of the MAPS RV program sponsored by the Assemblies of God where they traveled across the United States in their RV helping other churches in need and sharing their talents where it was needed. Their other love was the Teen Challenge girls home in Disney, Oklahoma where they spent many years with their dear friends Ken and Sandy Little who were the directors there. They built an activity center for the girls and it is now called the Tolbert Center.

Faye loved to cook and is famous for her Chocolate Gravy, Tacos, and brown beans, fried potatoes, and cornbread. She loved to crochet and make beautiful quilts for her grandchildren. Bill and Faye loved to fish at Broken Bow, Oklahoma, deer hunt in Meeker, Colorado, and travel from state to state in their RV. They also went on many cruises. They had a very full life and have been blessed with many wonderful friends and family.

Memorials may be made to the girls home in Disney, Oklahoma at the following: New Lifehouse, P.O. Box 670, Disney, OK 74340.

Special thanks to our amazing caregivers, Sandy Little, Dayle Sulzman, Diana Caskey, and our devoted nurse, Stephanie Wilson. They brought joy and peace to our parents and treated them like family, and we will be forever grateful.
To order memorial trees or send flowers to the family in memory of Ora Faye Tolbert, please visit our flower store.