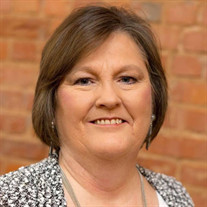 Patricia Ann (Nichols) Colston entered into the presence of her Savior on April 3, 2022. Patricia was born on April 5, 1960 to Marion Inez (Walker) and Harold Gene Nichols. She was the third of what would become a family of four girls and one boy. Patricia always said she was "yanked up" along the Red River, having been born in Amarillo, TX, and spending her school years in Altus, OK. Patricia graduated from Southside High School as Salutatorian of her class.
Patricia accepted Jesus Christ as her Lord and Savior at a young age and faithfully served Him throughout her life. It was in church that she met her future husband, Robert M. Colston, III. And while Patricia tried several times to break off the relationship, Robert kept the pursuit up and the two of them married on August 21, 1978. God blessed their home with two daughters, Mitzi Ann and Rachel Lynn.
Patricia faithfully and graciously served alongside Robert in ministry, first working tirelessly as a mother and wife so Robert could complete college and seminary, then as a model Pastor's wife for over 30 years. Patricia not only supported Robert in his ministry, but engaged in her own ministry as a local and state Acteen Leader, teaching and leading music for Vacation Bible School, as well as serving as pianist and worship leader for many of the small churches where God let them to serve in Missouri, South Dakota, and Oklahoma. One of Patricia's greatest joys was being a member of the Singing Churchwomen of Oklahoma. She joined the group in the early 2000's, and was able to travel with her husband on the SCW's mission trips to Romania/Hungary, Colorado, and Estonia/Latvia.
For Patricia, family was everything and there was nothing she wouldn't do for her daughters and later for her grandchildren. Patricia was always trying to find ways to encourage each of them to be the best that God created them to be. She was the disciplinarian when needed, but also the instigator of fun. Patricia made sure that her daughters and grandkids knew that no matter what, they were loved by her and God.
Patricia was preceded in death by her sister Janice. She is survived by her husband Robert of the home; daughters Mitzi Flynn and husband Johnathan of Hydro, and Rachel Colston of Hydro; parents Marion and Harold Nichols of Claremore; siblings Diana Thurmond and husband Raymond of Altus, Terri Houdek and husband John of Owasso, and Glenn Nichols and wife Stacy of Foyil; grandchildren David (DJ), Mikayla (KK), Lakken, Leah, Alex (AJ), and Brayden; as well as numerous nieces, nephews, cousins, and friends. Patricia will be greatly missed.
In lieu of flowers the family has asked for donations to be made to the Oklahoma Baptist Children’s Home.
To order memorial trees or send flowers to the family in memory of Patricia Ann Colston, please visit our flower store.