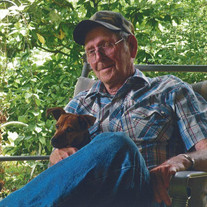 Paul Thompson was born at home to Luther and Pauline Thompson (England) on July 30,1935. He passed away Thursday, December 17, 2020, at the age of 85. He has lived around Claremore all of his life. He started at a young age working in the sawmill and drilling water wells with his dad . In 1953 he went on a blind date, and met Maxine Owens. They were married on June 30, 1953. They had 3 children, Jack, Debbie, and Connie.
Paul worked as a oil field worker, truck driver, and mechanic for Peabody Coal. He retired from Tulsa Airport Authority as a mechanic.
He liked listening and going to bluegrass shows, He always wanted to go gold panning. He could fix almost anything, and some people remember him as Mick.
He is survived by his children Jack and wife Cathie, Debbie Thompson and Toney Dicks, and Connie Wilson and husband Eddie; siblings Minnie Brassfield, Lois Harrison, and Luke Thompson (Trudy); grandchildren Shane Thompson, Travis Thompson, Levi Adams, and Casey Wilson; and nine great-grandchildren.
He is preceded in death by his wife Maxine Owens; parents Luther and Pauline Thompson (England); brother Billy Thompson; sisters Joy Nixon and Opal Smith; and grandson Jackie Thompson. He will be deeply missed by his friends and family.
To order memorial trees or send flowers to the family in memory of Paul Delbert Thompson, please visit our flower store.