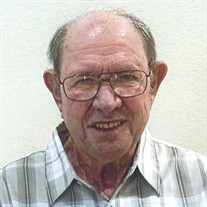 The son of Maurice and Ruby Miller Thompson was born November 4, 1941 in Vinita, Oklahoma. As a young boy he spent lots of time with his grandparents in Vinita. As he became older he began traveling with his dad, who worked on the pipeline. During this time he lived in many towns across the country. Eventually he settled down in Bartlesville. There he began working for Phillips Petroleum. On one of his weekends off, Preston decided to visit Claremore. There while hanging out as most people did, he met Vera Self. The two would begin dating and would marry on April 11, 1968. The newly wed couple made their home in Claremore. Preston then began working for Allied Signal. After a short time he took a job working for Terra Nitrogen. He retired from there in 1998 as a shift supervisor. In his spare time Preston loved hunting, especially deer and elk. He also enjoyed fishing and traveling to Colorado.

He is preceded in death by his parents and daughter, Tammy Thompson.

View and sign Preston's online memorial at www.mmsfuneralhomes.com
To order memorial trees or send flowers to the family in memory of Preston Thompson, please visit our flower store.