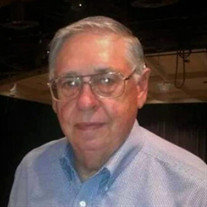 Raleigh was born in Chelsea, Oklahoma to Raleigh and Janetta {Goats} Parks on October 28, 1945. Growing up on the family farm with seven brothers and one sister they were all taught the value of hard work and doing your best no matter the task at hand. Janetta always made sure that all the boys looked their best when going somewhere, lining them up to make sure their hair was combed and their fingernails were clean, but the most important lesson they learned was to love the Lord, gathering every evening to read the Bible and pray as a family. While growing up Raleigh went to school at Bushyhead and Chelsea graduating with the class of 1964. After graduation Raleigh was drafted into the United States Army serving our country as a medic in Okinawa, Japan during the Vietnam War. Shortly after returning home he met the love of his life Sharon McCuen at Wichita, Kansas, the couple dated for a year before getting married on November 22, 1968 in Norman, Oklahoma, moving his new wife to Chelsea, building their family home on what most locals call Parks Road.
Raleigh started his own business, Parks Body Shop and became a well known auto body repairman for his community and for Jack Kissee Ford for many years before his retirement.
He was always kind and caring, soft spoken, and a man of few words but when he spoke people listened. He loved spending time with his family and took great pride in his grand kids who loved to spend time at Pawpaw's, feeding the fish in the pond or tinkering in the shop on one project or another. He was a genuine friend and will be greatly missed by all who knew him.
Raleigh is preceded in death by his parents; Raleigh and Janetta Parks, sister; Linda Sue Parks, and brother; Ronnie Parks
He is survived by his wife; Sharon Parks, son; Tim Parks and wife Timalyn of Chelsea, OK, daughter; Kerri Vaughn and husband Jason of Kirby, AR, five grandchildren; Andrew Parks and wife Caselyn, Madison Vaughn, Abigail Parks, Austin Parks, and Madelyn Vaughn. Six brothers and one sister along with many nephews, nieces and a host of friends.
To order memorial trees or send flowers to the family in memory of Raleigh Parks, please visit our flower store.