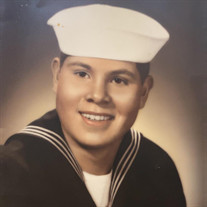 Funeral services for Richard Bruner Jr will be held on Tuesday June 7th at the Claremore Emmanuel Baptist Indian Church with Pastor Woody Hansen officiating and Pastor Paul Fixico. A burial will follow at New Hope Cemetery, Hulbert, Oklahoma where a grave site service will be held under the direction of the Musgrove-Merriott-Smith Funeral Service and Crematory.

Richard (Full Blood Muscogee Creek Indian) died Wednesday, June 1, 2022, at his Claremore home at the age of 90. The son of Lizzie Leader and Richard Bruner Sr was born December 2, 1931, in the Ragtown Community, Hughes County, Oklahoma. His family moved into Holdenville in 1944 before he transferred to Haskell Institute (Indian boarding school in Lawrence, Kansas), attending from 1947 to 1951

Richard served five years in the Navy from 1951 to 1956. He joined the service in Topeka, Kansas, had boot camp in San Diego, California and served during the Korean War. Initially he served on a Destroyer but was later transferred to the Cruiser USS Bremerton (CA-130) as a Deck sailor. However, since he had previous knowledge about guns from the National Guard in both Oklahoma and Kansas, he became a 2nd class Gunners Mate. In 1953 he was transferred to the Sasebo, Japan ammunition depot. On the Bremerton he was wounded in action from a Korean fortified costal area when a shell hit the ship and exploded in close proximity. At Sasebo he was wounded for a 2nd time when he stepped on a Punji stick trap.

In 1958, in Tahlequah, he married Betty Keener, from Hulbert/Lost City that he had initially met at Haskell Institute.

Richard was a long-time mail carrier in the City of Claremore. He was very active in the organization and physical building of the Claremore Emmanual Indian Baptist Church during the early 1960’s where he taught Sunday school and Vacation Bible school for several years. He enjoyed history, discussing tribal issues, researching land issues, family lineage, reminiscing to his kids and grandkids about the ‘way it was’ in the Navy, his parent’s and grandparent’s, World War II, Korea, his old classmates, Haskell and keeping a special book that he wrote in periodically over the years to make sure that we remembered his stories and to help prepare us for this day when he would not be with us (physically any longer but would always be spiritually).

His wife Betty preceded him in death 15 years, he missed her every day. The evening before his passing he said ‘I wish that we did not have to get old, but I am glad that Mom went before me, and I did not have to see her get real old. I miss just getting in the car and going places with her. I feel her close at times, sometimes I know she is just in the other room or in the kitchen making coffee’.

‘We will miss and love you too Dad’ and will feel you close – every day. There was never a problem you could not solve, a plumbing issue you could not fix or a grandchild you could not help. You were never a burden when you needed our help, and getting the chance to help take care of you was a privilege. You and Mom have ‘set the bar’ for many generations of our family yet to be known. The generations hundreds of years from now will know that you carried the family forward and a lot of it started on a solid foundation that you laid while you were here. You and Mom would love to tease each other about which tribe was the cleverest (Dad – Muscogee Creek and Mom – Cherokee) so I am sure that conversation has started back up and will now continue for all of eternity.