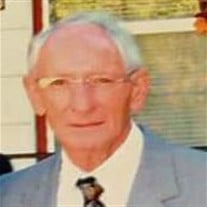 Richard Darrell Harrington passed away on Saturday, March 30th, 2019 in Pryor at the age of 82.

The son of Lisle and Dottie Harrington was born February 3, 1937 in Covington, Oklahoma. As a young boy Darrell and his family moved to the Inola area. There he would later attend school, until moving to Claremore for his junior and senior years. During those years Darrell established himself as one of the area's best pitchers. In fact it was while pitching during summer league ball that he first caught the eye of Gloria Caffey. The two eventually became high school sweethearts. After graduating from Claremore High School in 1955, Darrell went to Northeastern State University to play baseball. He continued his post graduate at Western State of Colorado. He was also a member of the Phi Sigma Epsilon fraternity.

Darrell had an extensive professional career. He began his first job working in Ralston. He later coached at Catoosa, Oologah, Cleveland, and lastly at Turner High School. Darrell retired in 1988 from coaching, with more than 400 wins as a girls basketball coach.

After retirement, Darrell continued to live at Falconhead. There he took full advantage of his life on the golf course. If he wasn't golfing he was more than likely boating. In 2006 he moved to his present home in Pryor.

He is preceded in death by his parents, Lisle and Dottie Harrington.

Survivors include his wife Gloria of the home; son, Rick and wife Susan of Vinita; grandchildren, Travis of Ada, and Hannah and Annie of Tulsa.

View and sign Richard's online memorial at www.mmsfuneralhomes.com
To order memorial trees or send flowers to the family in memory of Richard Darrell Harrington, please visit our flower store.