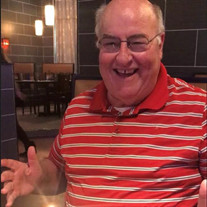 Services for Roger Dean Norman will be held at Wednesday, April 13, 2022, 10:00 AM, at Memorial Heights Baptist Church; burial will follow at Woodlawn Cemetery. Visitation will be at the funeral home Tuesday, April 12, 3:00-8:00 PM, with family receiving visitors from 5:00-8:00 PM. Roger passed away on April 7, 2022 at the age of 68.
Born April 22, 1953 in Claremore, Oklahoma to Edward Eugene and Bonnie Mae (Armstrong) Norman, Roger attended school in Claremore, graduating with the class of 1971. He continued his education at Claremore Junior College, now RSU. On November 3, 1972, after just a few months of dating, Roger wed Pamela Sue Douglass. The couple made Claremore their home and spent the following 49 years together raising their four children and loving their many grandchildren.
Roger began a long and storied career in law enforcement shortly after marrying Pamela Sue, first with the Claremore Police Department and then later the Tulsa Police Department. He worked for the City of Tulsa long enough to have earned retirement twice; first in 1995 as a TPD officer, thereafter earning his Bachelor’s and serving as a ranked officer for the Tulsa International Airport for many years, and then again in 2020 as the civilian supervisor for TPD Records.  His family is exceedingly proud of his career and his dedication to public service.
Roger was first and foremost a family man; he took great care of his family and was each member’s biggest fan. Each of his children and grandchildren agree that a man will not be found on this Earth that loved and supported his family more than Roger. He loved having family dinners, vacations or just evenings at home visiting. His grandchildren lit up his world. He was looking forward to meeting his precious first great-granddaughter Penelope.  Roger was a remarkably generous man and looked for ways to help not just his family, but members of his community. Family or friend, a person knew they could count on Roger if they were ever in need. He had a heart of gold to match a warm and happy personality. He was an all-around loving man that spent his entire life serving his community.
This gentle giant will be missed by all who knew him, and especially his surviving family members: his wife, Pamela Sue; his children Robert Norman and significant other Shannon Ketcher, Kathy Lahmeyer and husband James, Jennifer Olson and husband Dennis, and Whitney Norman and husband Joel Roberson; grandchildren Jordan Lahmeyer-Jarrett and husband Dr. Christopher Jarrett and 9-day-old great-granddaughter Penelope, Brad Lahmeyer and wife Kyla, Payton Lahmeyer and husband Ayson, Kacie Lahmeyer, Cameron Lahmeyer, Addison Lahmeyer, Easton Lahmeyer, Dennis Olson III and significant other Kayte Keyes and great-grandson Dennis Olson IV, and Octavia Olson; sister-in-law Sherry Norman; nephew Orval Norman and nieces Daina Norman and Yvonne New.  Roger was preceded in death by his parents Edward and Bonnie Norman and his brother Gene Norman.
To order memorial trees or send flowers to the family in memory of Roger Dean Norman, please visit our flower store.