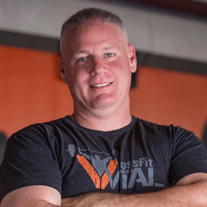 Funeral service for Ryan David Phillips will be 1:30 pm, Friday, April 5, 2019 at First United Methodist Church of Tulsa. Family will receive friends at the church on Thursday, April 4, from 4-8 pm. Services are under the direction of MMS-Payne Funeral Home and Cremation Service of Claremore.
Ryan passed away Tuesday, April 2, 2019, at the age of 42.
The son of David and and Jane (Hale) Phillips was born April 8, 1976, in Tulsa, Oklahoma. Ryan was raised in Tulsa, where he attended Nathan Hale High School. There he played basketball and was a member of the graduating class of 1994. Following high school, Ryan attended the University of Oklahoma, as well as a few other colleges, earning his Bachelors degree in Criminal Justice from Langston University. In February, 2005, Ryan was accepted to the Tulsa Fire Academy. He spent his career at Station 29 on South Lewis. In addition to being a Fire Fighter, Ryan advanced his education, becoming a Paramedic.
It was in February of 2004 that Ryan was introduced to Carrie Jones. Ryan did as it is said the "Hale men" do, and took his time (4 years) courting Carrie before marrying her at The University of Tulsa’s Sharp Chapel on May 3, 2008.
In his spare time, Ryan enjoyed coaching and doing CrossFit with his CrossFit Vital family, an occasional round of Golf, OU Football, the Chicago Cubs, the Chicago Bears, and the OKC Thunder. But all pale in comparison to the time he got to spend with his daughter Reese. He loved watching her compete, and being a soccer dad. He enjoyed traveling with his family and enjoyed his many vacations at the beach, with Gulf Shores being a favorite destination.
Survivors include his wife Carrie and daughter Reese of the home, parents David and Jane of Tulsa; numerous other extended family members; and his dogs, who he referred to as brown dottir Bailey, and Mac, also know as Mr. Brown.

View and sign Ryan's online memorial at www.mmsfuneralhomes.com .
To order memorial trees or send flowers to the family in memory of Ryan David Phillips, please visit our flower store.