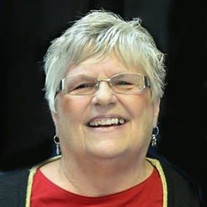 The daughter of Ted and Cleda Costley Brown was born June 5, 1941 in Schell City, Missouri. She was raised in the small rural town of Richards. There she would later attend school. In the years to follow she would be introduced to Jake Politte. They would begin dating, and would marry on March 10, 1960 in Fort Scott, Kansas. The newlywed couple would make their home in Stotesbury, Missouri. In the years following Sandy focused on raising her family, although she helped perform many duties on their dairy farm. In 1963 Sandy and her family would leave Missouri and follow family to the Sequoyah area of Oklahoma As her children got older, Sandy decided to take a job, working in Claremore for the Heston Corporation. After many years of service, the plant would close, forcing Sandy into partial retirement. This gave her more time to volunteer with her church, The First Assembly of God in Claremore, and spend more time with her grandchildren.

Those who knew Sandy, knew that she loved Hallmark. She not only was one of the most loyal customers to the local stores, she never even missed a movie. She was also known to be very meticulous. She wanted her yard to look a certain way, that's why she tended to it herself. She also enjoyed drying her clothes on the clothes line, making sure that each piece of clothing hung a certain way, even with specific clothespins. Her ironing was starched to the point that they looked sharp all day long. However even as meticulous as she was, which could have been seen as a little stubborn to her family, it was her family that was the most important to her of all. Family dinners were a must. Even growing up, they would sit at the table together for every meal, especially breakfast and dinner. When grandchildren arrived, she was there to help in any way she could. Her family was her life.

She is preceded in death by her parents Theodore and Cleda Brown, and great-granddaughter, Darian Robertson.