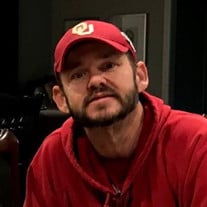 Shawn Eugene Payne passed away on Monday, August 1st, 2022 at the age of 55 after a hard fought battle with diabetes.

The son of Gerry Payne and Judy (Morrison) Simpson was born June 14, 1967 in Tulsa, Oklahoma. As a long time Rogers County resident, Shawn would spend all his early years in and around Chelsea. There he would attend Chelsea schools, graduating as a member of the class of 1985. It was also where he would first get introduced to the roping arena. Team roping was his favorite event, and he enjoyed the many hours he spent horseback. After completing high school Shawn wanted to continue his education. He enrolled at NEO in Miami. Over the next several years he would also attend Bacone College in Muskogee, and Panhandle State University in Guymon, graduating with a bachelors degree in Animal Science, and as class president of the agriculture department. After graduating in the early 1990's, Shawn began his working career in sales. Manufactured homes became his area of expertise. Over the next several years he would work in Louisiana and Texas before opening a family dealership in Claremore. Eventually he would leave the sales industry to begin a new career with the Cherokee Nation. He would start his career with them as a blackjack dealer in Catoosa. He was quickly promoted throughout the organization, becoming one of their hospitality and marketing directors. With his natural ability to lead and interact with people, Shawn was often called on to help open the new casinos. Places such as Siloam Springs, Roland, and Sallisaw is where he spent the majority of his time.

Over the years Shawn attended school, worked and met many people in many different situations. However they would all agree on one thing. That is that Shawn enjoyed life. He loved being a part of something. He joined the Sons of American Legion, participated in the first ever Leadership Rogers County, and was a member of the Elks Lodge. He enjoyed fishing and playing pitch. He was an avid golfer, who traveled with friends all over the country to enjoy new courses. It didn't matter where or what he was doing, people gravitated to him He would be the life of the party, or the leader who would take charge to get something done. All who knew him, loved him, and will greatly miss him.

Shawn is preceded in death by his grandparents, Charles and Doris Payne, and Roy and Lucille Morrison, step-mother, Shirley Payne and aunt Sue Coulston.

View and sign Shawn's online memorial at
www.mmsfuneralhomes.com ,
To order memorial trees or send flowers to the family in memory of Shawn Payne, please visit our flower store.