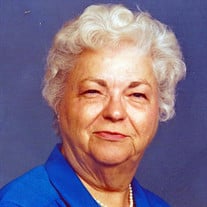 Funeral service for Thelma Henley will be11:00 a.m. Friday, March 15, 2019, at River of Life Assembly of God Church in Inola, Oklahoma. Pastor Rodney Wilborn will officiate. Burial will follow in Highland Cemetery, under the direction of Inola Funeral Home and Crematory.

Thelma passed away at Emerald Care Center in Claremore on Sunday, March 10, 2019. She was 95 years old.

Thelma Irene Henley was born in Cushing, Oklahoma on March 25, 1923, the daughter of Roy Sydney Richeson and Lola Marie (Arthur) Richeson. She grew up and attended school in her birth community, graduating with the class of 1941. In college, she began corresponding with a soldier who was a friend of her friend's boyfriend. Four years later, William Osborn Henley got a leave from the military, and the two met in person for the first time at St. Louis's Union Station. They immediately traveled to El Dorado, Arkansas, where they were married on May 14, 1945. After his discharge from the military, the couple moved to Tulsa, eventually settling in Inola.

Thelma's lifetime occupation was as a homemaker, and she excelled at her work. She was an amazing cook and seamstress, even making clothes for her daughter, Marsha. She also loved to paint. Her landscape paintings, hand-painted plates, and pencil drawn portraits demonstrated her overwhelming talent as an artist. In her spare time she enjoyed playing bingo with friends. Her family was always her first priority; her thoughts, prayers, and time given with hopes of their happiness.

She was preceded in death by her parents, her husband Bill, and brothers Melvin, Kenneth, and Ronald Richeson.

View and sign Thema's online memorial at www.mmsfuneralhomes.com
To order memorial trees or send flowers to the family in memory of Thelma Irene Henley, please visit our flower store.