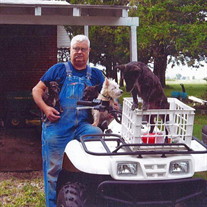 Vincent Mark Howard passed away on Monday, September 14, 2020 at his home in Claremore. He was 78 years old.
Mark was born on February 13, 1942 in Fayetteville, Arkansas to Paul Mansfield Howard and Virginia (Thomas) Howard. He graduated from Claremore High School in 1960 and continued his education at Oklahoma Military Academy. Later, Mark earned an Associate Degree in Computer Programming from Rogers State University and a Bachelors degree from Oklahoma Wesleyan University in Bartlesville.
Mark served his country proudly in the U. S. Army during the Viet Nam era. He lived in Arizona and worked for Motorola for 17 years. On December 25, 1982, Mark married Linda Kay Collins in Claremore. Mark worked for AEP/PSO as an Electrical Technician until his retirement in 2006.
Mark was preceded in death by his parents, Paul and Virginia Howard, and sister Victoria Howard. He leaves his wife, Linda Howard of Verdigris; siblings Martin Howard and wife Kathy, Paula Yates and husband David, and Philip Howard and wife Sherry, all of Verdigris; sons Perry and Jason Howard of Mesa, Arizona; son Douglas Collins and wife Lisa, of Woodbridge, Virginia; and daughter Shelley McCord and husband Steve of North Chesterfield, Virginia to mourn his passing.
View and sign Mark's online memorial at www.mmsfuneralhomes.com .
To order memorial trees or send flowers to the family in memory of Vincent Mark Howard, please visit our flower store.