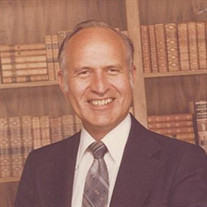 Private family services will be held for Claremore resident, Walter Hailey. Friends may visit at MMS-Payne Funeral Home in Claremore on Sunday, October 18, 2020, from 3-6 pm. Walter passed away Wednesday, October 14, 2020, at the age of 90.
Walter Charles Hailey was born October 31, 1929 in Andrews County, MO. He was the son of Cleo Marland Hailey and Myrtle Alice May (Ingram) Hailey. Walter grew up in Huntsville, MO. Eventually, his family moved to Merced, CA, where he graduated from Merced High School in 1947. For a time after graduation, Walter worked for a gold dredging operation in the Merced River. Later, he enlisted in the U.S. Army, and became a radar technician. Most of his time in the military was spent in Alaska. After his discharge from the Army, Walter moved to Kansas City, MO. It was there at a dance that his brother introduced him to Betty Joan Kidd, who would become his wife on April 7, 1956, in Peculiar, MO.
Walter began working as a computer engineer for IBM in 1954. His work with the company took him to Bartlesville, OK, Okinawa, and eventually to Tulsa, Oklahoma. He retired from IBM in 1991.
In his spare time, Walter followed many pursuits. He was a member of American Legion Post #1 and IBM Group. He helped with the local Boy Scouts and Girl Scouts, and also helped the Jaycees with their polio vaccine program.
He enjoyed gardening and genealogy, and never met a stranger. He loved talking to anyone he met. But by far, his favorite times were spent with his family.
Walter was preceded in death by his parents, his daughter Sheryl Kay, and siblings Marlin Hailey and Kathy Besio.
Those left to mourn his passing are his wife Betty; children Janice Wilks and husband Terry, Tammy Beam, and Jeff Hailey and wife Becky; grandchildren Jim Beam and wife Inez, Sheila Chalakee, Sharlet Kanehl and husband David, Shanda Heatherly and husband Craig, Silynse Britt, Alex Briggs and husband Tim, Shampaigne Willcox, Alex Hailey, and Sami Hailey; nineteen great-grandchildren; two great-great-grandchildren; siblings Rosemary Thompson, Jody Pinta, Jesse Hailey, and Ray Hailey, along with numerous nieces and nephews.
In lieu of flowers, memorial donations may be made to First United Methodist Church, Claremore, or the Alzheimer's Association.
View and sign Walter's online memorial at www.mmsfuneralhomes.com .
To order memorial trees or send flowers to the family in memory of Walter Charles Hailey, please visit our flower store.