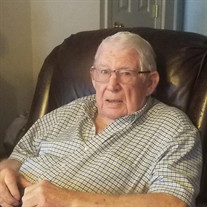 The son of Ray and Ruby (Chance) Waldrup was born May 6, 1933 in Coweta, Oklahoma. During Wayne's childhood he would live mostly in the rural area between Inola and Wagoner. He would later attend and graduate from Wagoner Schools. In his high school years Wayne and his friends spent lots of time visiting and socializing in Inola. It was there through a friend that Wayne would first meet Wahlele Summerlin. They would begin dating and married on March 10, 1951. The newly wed couple would make their home just outside of Inola in the Gregory area.

Wayne worked hard to support his family. He was first employed by National Tank where he worked until an injury forced him to stop. When he was able to return to work he delivered milk and even open a local cafe. However he eventually took a job for McDonnell Douglas, where he worked many years before retiring in the late 1980's. After retiring Wayne, enjoyed spending time on his farm, east of Claremore. There he raised his cattle, and enjoyed his country setting.

In his spare time Wayne had many hobbies and past times to keep him busy. He loved traveling to the mountains of Colorado, and also to Brownsville, Texas. He was also an avid square dancer and enjoyed the many dances he and Wahlele attended all over the country. Playing dominoes and card games such as pitch, spades, hearts and many others also helped occupy his time.

He is preceded in death by his parents Ray and Ruby Waldrup; wife, Wahlele, brothers, Marvin and Harold Waldrup and son Jimmy Wayne Waldrup.

View and sign Wayne's online memorial at www.mmsfuneralhomes.com
To order memorial trees or send flowers to the family in memory of Wayne Waldrup, please visit our flower store.