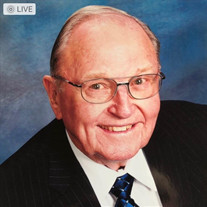 William “Bill’ Wayne Most was born on October 23, 1926, in Chelsea, Oklahoma to Erma and Herman Most. He was a stellar basketball athlete in Winganon and at Chelsea High School. He graduated in the Class of ‘44. He joined the Marines at 17, and married Fleeta O’Connor prior to serving in World War II and in the occupation of China. While overseas, a stillborn son, William Jr., was delivered. After he returned a daughter, Judy Faye, was born.
Bill was a successful refrigerator repairman in Vinita, Oklahoma and Modesto, California. He taught refrigeration at Modesto Junior College, and went to Purdue University for additional training in summer for nearly 20 years. After his first wife passed, Bill married Jeannetta Tredway, and a second daughter, Kristi, was born. He was then married to Jean Wagstaff, for nearly 35 years. Through that marriage he openly welcomed her two children, Jerry and Jeanne, as his own. Throughout his life Bill served his church, the VA, the Masons and American Legion. He was Worshipful Master of lodges in OK and CA. He served as leader in the four Lodges of Scottish Rite in Stockton, Ca, where he was awarded the 33rd Degree. He also often went through the chairs in Eastern Stars, and served as Grand Worthy Patron for the state of Oklahoma. He served as Commander of the American Legion Post in Vinita numerous times.
Bill is survived by his children, Judy Khoury, Kristi Most Tredway, Jerry and Angie Wagstaff and Jeanne and Ross McClish, and his partner for the past 12 years MaryJane DeLozier. He was proud of his 4 children, 8 grandkids, and 15 great-grandkids. Without a doubt, Bill was a dedicated father, husband, and friend who truly supported his community. He lived life to the fullest, was always ready to share a story, and everyone that met him left with a smile.
In lieu of flowers, memorial donations may be made to the Shriners Children's Hospital or Cowboy Junction Church, or plant a tree in Bill's memory.
View and sign Bill's online memorial at www.mmsfuneralhomes.com .
To order memorial trees or send flowers to the family in memory of William "Bill" Wayne Most, please visit our flower store.