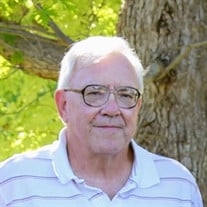 William Douglas Gardner, Jr. (Bill) passed away on September 14, 2022, he was 78 years old. Bill was born to William Douglas Gardner Sr. and Bonnie Lee Gardner, Potter in Tulia, Texas. He graduated from Tulia High School in the class of 1961.  In 1965 he married Alma Sue Gardner.  He graduated from West Texas State University in 1967, and enlisted in the Army in 1967.  He was stationed in Germany where he worked in Communications and Intelligence. After his time in the military they moved to Amarillo, TX and then Littlefield TX for a short time before making their home in Plainview, TX.

Bill dedicated his life to the service of others. He worked for the Department of Child Services as a Social Worker and Supervisor for 27 years, then as a probation officer for 12 years before retiring in 2012.
Bill was an avid sports fan and reader. He especially loved baseball.  He was an active member of the Plainview Noon Optimist Club and coached little league baseball and also served as the Summer Baseball Commissioner and Regional Babe Ruth Commissioner during a 20 year span. He also enjoyed collecting baseball cards  and following Texas Tech and Wayland Baptist University sports teams. He was an avid walker and enjoyed spending time outdoors, walking seven miles a day.

He is preceded in death by his parents, William Douglas Gardner Sr. and Bonnie Lee Gardner, sisters Joann Sims, and Robbie Gail Crafton and brother in law Charles Crafton.
Bill is survived by his wife Sue Gardner; son Robert Gardner and wife Chrystal; daughter, Angela Andrae; seven grandchildren, seven great grandchildren and one on the way.
To order memorial trees or send flowers to the family in memory of William Douglas Gardner, please visit our flower store.