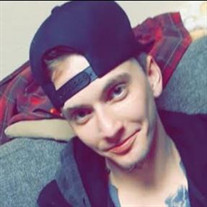 Born July 23, 1996 in San Diego, California, to Sean Daly and Keely Terry Gerlach, Zeth lived in Claremore most of his life. He attended schools here, and was an honor roll student. Not only was he accomplished in his academics, Zeth also excelled in sports; soccer, football, track, and wrestling were his favorites. He was always challenging himself to be the best at what he did. Being first was his goal, and quite often he was. Zeth kept busy with other school activities such as academic team and the chess club.

Zeth's nature was to be the comforter and the one his many friends could always count on to help them thru any situation or just to cheer them up.

Those family members that survive include his mother and step-father Keely and Robert Gerlach, his father Sean and Shannon Daly; his siblings Robert Hume and wife Laura, Breanna Briscoe, Mark Briscoe, and Nazra Daly; his nephews Roxx Hume and Beck Briscoe; and his grandparents Catherine and Joe Gay, and Robert and Mary Gerlach. Zeth was preceded in death by his grandfathers Mike Daly and Dr. Michael Terry.
To order memorial trees or send flowers to the family in memory of Zeth Patrick Daly, please visit our flower store.